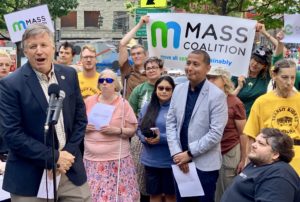 Click to read about the MASS Transportation Package in The Urbanist

In August, the MASS Coalition launched an ambitious set of  proposals to make it easier to take transit, bike, wall and roll around our city. We called it the MASS Transportation Package. Since then, with the support of elected officials including Councilmembers Mike O’Brien and Abel Pacheco (pictured here), we’ve been making progress!

Most of us, including transit riders, are pedestrians at some point during our day. On September 30th the Seattle City Council unanimously passed two resolutions aimed at making it easier and safer to walk and roll in Seattle. One directs the city to develop a new program for maintaining our sidewalks. The current system is broken: It’s the responsibility of property owners to make repairs, but this almost never happens. Sidewalks fall into decay, and too often people fall and get injured. We’re encouraging the city to work on a new program that is both equitable and effective. The other resolution directs the city to develop a consistent and safe policy for traffic signal timing. Right now, too many signals privilege car traffic over people walking and rolling. Everyone should have time to cross the street, including those of us who move more slowly, and people need to know what to expect when they get to a crosswalk.

This comes on top of three big wins for safe streets and people biking earlier in September:

Stay tuned as the MASS Coalition leaps into the city budget process and takes more steps towards realizing our MASS Transportation Package!