Public transit should be accessible for everyone, especially those of us who don’t have other good options due to a disability. The Transit Riders Union is organizing to make King County Metro, Sound Transit, and Access services more accessible. If you or people you know have trouble using public transit due to a disability, we want to hear about it! You can take our short Disability & Access survey here.

Disabled riders have seen some of the steepest fare increases in recent years. Up until 2011, disabled riders could purchase an Annual Metro Pass for just $99. In 2015, a mere four years later, the monthly pass cost had risen to $36, for a total of $432 per year!

The Transit Riders Union believes that transit should be free for low-income people with disabilities. This wouldn’t be unprecedented; San Francisco’s Muni bus system has a free pass program for low-income youth, seniors and people with disabilities. This was one of the goals of our Affordable Transit Delegation in 2015, and we continue to pursue it. 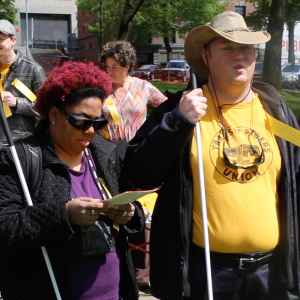 TRU’s blind and visually impaired members have driven our ongoing efforts to push King County Metro to improve the automated announcement systems on their buses, so that all riders have accessible information about stops and routes. In fall 2015 Metro began making big improvements their interior stop announcement system. Now, TRU is working with riders and allied organizations to make the transit system more accessible for chair users.

Want to help? Get in touch and get involved!