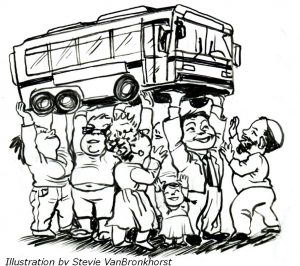 Our Mission: The Transit Riders Union is a democratic organization of working and poor people, — including students, seniors and people with disabilities — taking control over our own lives, and building up the power we need to change society for the good of humanity and of the planet. We will fight to preserve, expand, and improve the public transportation system in Seattle and beyond, so that every human being has access to safe, affordable, and reliable public transit.

1. We believe that every human being has a right to safe, reliable, affordable, and accessible public transit.

2. We recognize that, for the future of humanity and of the planet, we must move beyond the car- and fossil fuel-based economy.

3. We believe that the public transit system must be expanded and improved, not merely preserved.

4. We want high-capacity rapid transit, including buses and rail – but not at the cost of cutting off those who need public transit the most.

5. We believe that public transit must be paid for by corporations and the wealthiest section of the population, not by further squeezing poor and working people.

6. We are an organization primarily of poor and working people who depend on public transit; we will achieve our aims by first of all organizing and mobilizing this disenfranchised and growing section of the population.

7. We are a grassroots, participatory, and democratic organization; we believe that the decisions that affect the lives of poor and working people should be made by those people, and not by bureaucrats or corporate elites.

8. We recognize that in order to achieve our transit aims, poor and working people must build up social power, economic power, and political power; we will not hesitate to fight in any of these spheres, as needed for the advancement of our cause.

9. We are independent of all political parties, governments, unions, businesses, and non-profits; however, we may choose to work with any of these in coalition.

10. We will not use, or advocate the use of, violence to achieve our aims; if necessary we may resort to civil disobedience to unjust laws.