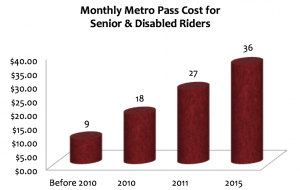 Seniors have seen some of the steepest fare increases in recent years. Up until 2011, riders over 65 years of age could purchase an Annual Metro Pass for just $99. In 2015, a mere four years later, the monthly pass cost had risen to $36, for a total of $432 per year!

The Transit Riders Union believes that transit should be free for low-income seniors. This wouldn’t be unprecedented; San Francisco’s Muni bus system has a free pass program for low-income youth, seniors and people with disabilities. This was one of the goals of our Affordable Transit Delegation in 2015, and we continue to pursue it.

Are you a senior for whom the cost of public transit is a financial hardship? Want to help the Transit Riders Union to win free transit for low-income seniors? Please get in touch!

In spring 2015 the Transit Riders Delegation for affordable transit fills the council chambers, and delegates rise to speak from the podiums. (Photo courtesy of the Metropolitan King County Council)