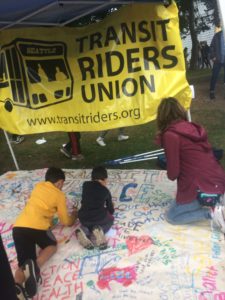 The Global Climate Strike on Friday, September 20th was amazing. In the morning, thousands gathered at Cal Anderson park to participate in workshops and take action for climate justice. We gathered petition signatures for ORCA for All and invited people to write and draw their vision of transit justice on a large canvass, which quickly filled up with color and energy.

The march proceeded to City Hall, merging with thousands of Amazon employees who walked out and rallied at the Spheres to demand that their employer step up and lead on climate. Their pressure is starting to work!

After the march and rally at City Hall, dozens of people, including middle school students and Seattle folk music legend Jim Page, testified in support of ORCA for All in a special meeting of the Sustainability & Transportation Committee. Members of the campaign discussed our proposals with Councilmembers Mike O’Brien and Lisa Herbold. Check out the video! The first 40 minutes are public comment, and the committee discussion starts around 1:20:00.