For years, the Transit Riders Union has fought to reform our upside-down tax system. For example, we have long argued that employers should contribute to fund public transit, because right now working and poor people pay twice: at the farebox, and through the regressive sales tax. In 2017, TRU helped to lead the Trump-Proof Seattle coalition, winning a Seattle tax on high-income households that was ultimately blocked in the courts. In 2018, TRU helped to lead the Housing for All coalition, winning a big business tax for housing and homelessness that was vigorously opposed by the business lobby and quickly repealed. 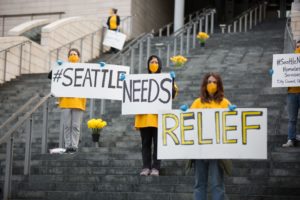 With so many false starts, we are thrilled that the Seattle City Council is now considering serious proposals to raise funds for economic relief and community resilience by taxing large corporations. We thank Councilmembers Kshama Sawant, Tammy Morales and Teresa Mosqueda for taking the initiative to put forward strong legislation. It’s heartening that a supermajority of the council has publicly stated support for proposals that would raise significant revenue for immediate pandemic-related assistance and, in the longer term, for affordable housing.

There are some things we liked specifically about the “Amazon Tax” legislation introduced by Councilmembers Sawant and Morales in April. The larger revenue amount, $500 million per year, is more commensurate with the immense scale of the housing and homelessness crisis and the challenges posed by the COVID-19 recession. With no “sunset” clause, there is a strong commitment to a progressive tax shift, and flexibility to bond against the revenue if needed. (If comprehensive tax reform does happen at the state and/or county level, city legislation could always be repealed or modified.) The tax would go into effect immediately, so even though collection couldn’t begin until 2022, revenue for this year would ultimately be captured. Finally, there are dedicated funds for “Green New Deal” programs that address our urgent climate crisis while creating good jobs.

There are also things we like about the “Jumpstart Seattle” plan put forward by Councilmember Mosqueda on June 16. By focusing on high-salary industries, the tax is more targeted at the corporations that can most afford to contribute. There are dedicated funds for immigrant and refugee communities, including undocumented workers who have been mostly excluded from COVID-19 relief programs. The proposal also addresses the danger of an “austerity” budget, reserving some funds to prevent cuts to vital city programs and services. It funds the Equitable Development Initiative, supporting community-driven development projects and stewardship of land and housing, especially by communities of color. Finally, with no “emergency clause,” this legislation doesn’t require the support of Mayor Jenny Durkan in order to pass — it only needs a supermajority of the council to override a mayoral veto.

The Jumpstart plan has the backing of a broad progressive coalition, and Councilmembers Lisa Herbold, Lorena González, Dan Strauss and Andrew Lewis have all indicated their support. It’s now clear that this legislation is the most likely vehicle for passing a major economic relief and community investment package this summer. We wholeheartedly support this effort, but we also believe this legislation can and must be made stronger.

The Transit Riders Union urges the city council to amend the Jumpstart Seattle legislation to raise the revenue amount to at least $300 million annually; this way, it will match or exceed the size of the “Tax Amazon” initiative measure that volunteers have been working energetically to place on the ballot, already gathering many thousands of signatures this month. The council should also direct significant funding toward Green New Deal programs. Finally, we urge the council to make the tax effective immediately so that revenue is ultimately collected for this year, and to remove the 10-year “sunset” clause.

Passing this legislation so amended will make an enormous difference to the health and well-being of our communities in the coming difficult years. It will build homes, prevent evictions, reduce displacement of Black and brown communities, preserve and create good jobs, save small businesses, and lift up the most marginalized. It will also mark a crucial turning point in the long struggle for equitable revenue, building momentum to flip our state’s upside-down tax system once and for all. We call on Seattle leaders to take this first important step!