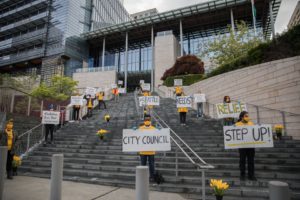 Yesterday, the Seattle City Council passed a major tax on large corporations for COVID-19 economic relief and affordable housing. Conservatively it’s expected to raise $214 million per year; with a higher tax rate for mega-corporations like Amazon, which the city doesn’t have the data to estimate, it’s likely the total is more like $240 or $250 million.

What a victory. For the Transit Riders Union, this fight began years ago— all the way back in 2017 when we first launched a campaign to transform our upside-down tax system with the “Trump-Proof Seattle” coalition. That summer we won a Seattle income tax on wealthy households, which was challenged in court and ultimately overturned, with mixed legal results. In fall 2017, we regrouped with the “Housing for All” coalition and launched the fight to tax big business into prime time. What followed was a brutal battle with Amazon and Seattle’s big business interests, culminating in the May 2018 passage of a $47 million “head tax,” a referendum campaign and the council’s ultimate repeal.

What a difference two years makes. Thanks to pressure of the Tax Amazon campaign and leadership from Councilmembers Teresa Mosqueda, Tammy Morales and Kshama Sawant, we just won a measure four to five times larger. It’s a major victory for progressive tax reform, and it will provide badly needed economic relief for renters, small businesses, undocumented immigrants and refugee communities; help to prevent an austerity budget next year; and fund affordable housing, community-driven development projects to fight displacement especially in Black and brown communities, and Green New Deal programs to tackle our climate crisis while creating good jobs. We are grateful to all our comrades in this victory and proud of TRU’s role in making it possible.

We can’t rest entirely easy until this measure passes fully into law and we’re sure that Amazon won’t run a referendum or try some other tricky business. This Wednesday, the Tax Amazon coalition is holding an action conference to discuss and decide how the 30,000 signatures the campaign has gathered should be used to protect this victory.

2020 has been a challenging and revolutionary year, and it’s only half over. Let’s take a moment to celebrate this progress and gather our energies for the road ahead!