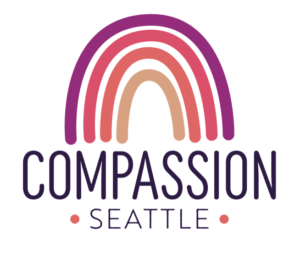 Yesterday, TRU joined with Real Change, Nickelsville and Be:Seattle to file a petition challenging the ballot title for the “Compassion Seattle” campaign’s proposed amendment to the city charter.

For our neighbors experiencing homelessness, the COVID-19 pandemic has been a crisis on top of a crisis. Indoor public spaces and public restrooms closed their doors. Many free meal programs and other services shut down. Shelters struggled to keep people distanced and safe from COVID. Meanwhile, there’s still a severe shortage of deeply affordable housing. And many homeless or housing insecure people lost jobs. So more people are sleeping outside. Not because they want to, but because there aren’t better options.

TRU members and friends have stepped up to do what we can and offer solidarity— our steadfast volunteer outreach team visits camps every week bringing home-cooked food, water, essential supplies and items people ask for. (You can donate here!)

We know the real solutions are systemic: First and foremost, deeply affordable housing. And until there’s enough housing, shelter that meets people’s needs, including keeping families and couples together, accommodating pets, having secure storage for people’s belongings, and offering both privacy and community. And whatever other services and supports people need— which also means paying human service workers a living wage.

There’s no mystery to ending homelessness. It requires acknowledging the scale of the crisis and coming up with the resources to truly address it, as multiple McKinsey reports have shown. We took a big step last year with the passage of Jumpstart Seattle, a pathbreaking tax on large corporations that, starting next year, will fund new affordable housing. The big business lobby groups hate the tax and the Seattle Metropolitan Chamber of Commerce is suing the city to try to overturn it. What jerks.

This year, those same lobby groups teamed up with former Seattle City Councilmember Tim Burgess to launch “Compassion Seattle.” They’re tired of seeing the tents lining the downtown business district. This initiative began as an attempt to codify sweeps in the city charter, which is a foundational document, like the constitution of the city.

Their initial language was really, really bad. But they realized they weren’t going to get far without the legitimation of service providers and homelessness “experts.” So they allowed some service providers to have input, and after a number of revisions, the final language is much less bad than it was. Reading it, you might even think it sounds good: The initiative directs the city to create 2,000 units of “housing” (permanent or emergency) within a year, with services including mental health & drug treatment; and it says the city should keep public spaces clear but balance this with the harm done to people by clearing encampments. And now, the whole thing “sunsets” (expires) after six years.

But here’s one major catch: No new funding is identified for all this work. In fact, the campaign claims that none is needed. Last week in Crosscut, TRU’s general secretary Katie Wilson thoroughly debunked this ridiculous claim.

The ballot title— what voters will read on their ballot in November, if the campaign gathers enough signatures— is extremely misleading, claiming that this measure will create housing and services and keep public space clear of encampments. We’re challenging this title because voters deserve to know the truth. Amending the city charter is not the right way to make policy, and it’s not going to solve our homelessness crisis.

What can begin to solve the crisis? Listening to homeless people, who are experts on their own situations. Supporting grassroots homeless organizations like WHEEL, SHARE and Nickelsville. Actually creating more housing! Addressing the deep underlying causes of the homelessness crisis, including a profit-driven housing market, systemic racism, and decades of neoliberal policies. Being honest about the scale of the homelessness crisis and serious about coming up with the resources needed to address it. And electing a new Mayor who will lead on these issues, rather than just sweep, sweep, sweep.

TRU will continue to push for real answers. And we’ll call out the fake ones. Join us!