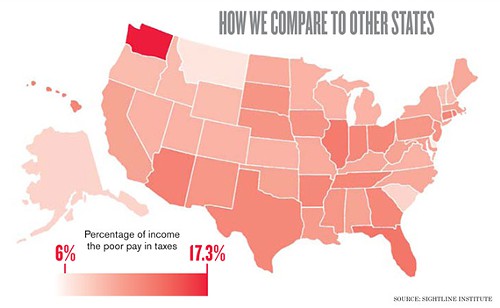 Now is the time to act, right here in Seattle. With the federal government in irresponsible and dangerous hands it’s up to us to build community and resilience and power at a local and state level. On January 28th the Transit Riders Union is hosting an Action Meeting where you can learn about an ambitious and exciting campaign that is in the works right now, and sign up to get involved. Meet in the large Hall 1 of the Labor Temple, 2800 1st Ave, at 2:00 PM.

Washington State has the #1 most regressive tax system in the nation. That means the poorest people pay the highest percentage of their income in state and local taxes – basically, Seattle and Washington State are tax havens for the wealthy. As a result we can’t adequately fund basic prerequisites of civilization, like education for our children.

And now, we’re all waiting to see what Trump’s administration is going to attack first. The Affordable Care Act is already on the chopping block. What’s next? Workers and their unions? Immigants? Social security and medicare? Foodstamps?

It’s time to act. We can help defend Seattle against Trump, set an example for other cities, AND pave the way to overhauling our state’s regressive tax system. If wealthy people with incomes over $200K contributed more fairly to our community, Seattle could raise hundreds of millions of dollars each year for affordable housing, transit, education, and green jobs. This will be a massive grassroots effort. We need you!

Get Feed for iCal (Google Calendar). This is for subscribing to the events in the Calendar. Add this URL to either iCal (Mac) or Google Calendar, or any other calendar that supports iCal Feed.