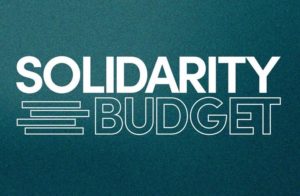 Wow, has it been an intense two months! In late September, Seattle Mayor Jenny Durkan released her proposed city budget for 2021. Thanks to the path-breaking big business tax we helped to win earlier this year, it wasn’t the all-cuts austerity bloodbath it might have been. But it still needed work.

Since then we’ve been working alongside comrades in the Solidarity Budget coalition to fight for a pro-people budget: One that divests from policing and invests in Black lives, instead of doubling down on centuries of racial oppression. One that supports Seattle residents and small businesses struggling through the COVID-19 recession, instead of making things worse by slashing city programs. One that advances toward an equitable, world-class transportation system and a carbon-free city, instead of letting that vision recede dangerously into the future.

On Nov. 23, the Seattle City Council passed their 2021 city budget with the leadership of budget chair Teresa Mosqueda. The mayor has said that she will sign it. (Yay! We don’t have to fight to override yet another Durkan veto.) You can read good local analysis in The Stranger, The Seattle Times, and Publicola.

We won a lot of things! And also, there is much more still to be done! Right after the final council vote, the Solidarity Budget team hosted a teach-in to review the progress we’ve made, and next steps. If you missed the livestream, you can watch it here.

Thank you so much to everyone who has taken action over the past two months to advance the goals of the Solidarity Budget: sending emails and making phone calls, testifying and taking action in the streets. These victories could not have happened without you. And we will need to stick together as we continue the struggle.

With leadership from Decriminalize Seattle and King County Equity Now, we fought hard to divest from the Seattle Police Department and invest in Black communities and community-based health and safety systems. While there is much further yet to go to actually meaningfully shrink the police force, the council reduced SPD’s budget by almost 20%, shifting some functions to other city departments and some funds to policing alternatives. Excitingly, at least $30 million will go to a community-led Participatory Budgeting process! (Want to get involved? Take this survey from the Black Brilliance Research Project.)

Here are just a few highlights of other budget victories won through the efforts of the Solidarity Budget and allied groups:

We know that all our struggles and our visions of a just future are interconnected. In this very challenging year, the Solidarity Budget turned this truism into reality by building alliances across issues, bringing together the biggest, baddest, broadest coalition around. We showed that by working together we can make progress, instead of letting ourselves be divided and conquered. We will continue and deepen these collaborations in the months and year ahead, knowing that our work is far from done. Thank you for being part of the movement!