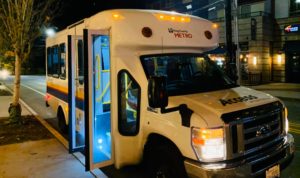 The groups intervened in the suit filed on November 13 by the Garfield County Transportation Authority, King County, the City of Seattle, and other plaintiffs. The groups are also joining in the motion for a preliminary injunction to stop I-976 from taking effect, which will be heard on Tuesday morning at 9 a.m. in King County Superior Court.

“The voices of transit riders need to be heard in this case,” said Katie Wilson, General Secretary of the Transit Riders Union. “Our quality of life is at stake. Many people depend on public transit for their basic mobility, and we can’t let this misleading and unconstitutional measure wreak havoc on our transportation system.”

“The legal right to accessible public transit for disabled Washingtonians is in serious jeopardy,” said Janine Bertram on behalf of Washington ADAPT. “King County has threatened to cut over $12 million from Access Paratransit. Fixed route transit cuts are also planned. Disabled people will be unable to get to work, school, appointments or exercise a normal social life if these drastic cuts occur.”

“I-976 poses a profound threat to Washington’s efforts to combat climate change and give people mobility options outside of driving alone,” said Vlad Gutman-Britten, Washington Director for Climate Solutions. “We’re determined to create a broadly accessible, low carbon transportation system, and so we’re committed to fighting this illegal and harmful initiative.”

Initiative 976 annuls a revenue source that was approved by over 62% of Seattle voters in 2014. According to the City of Seattle, this will lead to cutting over 100,000 hours of bus service next year. “I am devastated by I-976 passing,” says Karen Taylor, a member of the Transit Riders Union. “I don’t have a driver’s license, and rely on public transit exclusively, because Social Security Disability does not give me enough money to take Taxis or Lyft. The bus routes that will be affected are crucial to my survival and well-being.”

Also under threat is a program that provides free ORCA transit passes to many Seattle public school students. TRU advocated alongside low-income students at Rainier Beach High School who led the campaign that won this life-changing program in 2015. “I don’t live near my school and I don’t have anyone to give me a ride,” said Sara Abraha, a 9th grade student at RBHS. “But I do live near Othello Station. If the free ORCA card went away I probably would not come to school as often or I would have to risk a fine from fare enforcement just to get to school.”

TRU, Washington ADAPT, and Climate Solutions plan to coordinate with the City of Seattle and King County in bringing their lawsuit. “Just like the last two times Eyman used deception to push this proposal, I-976 is unconstitutional and will be overturned,” said Knoll Lowney, an attorney at the Seattle law firm of Smith and Lowney who is representing the organizations.