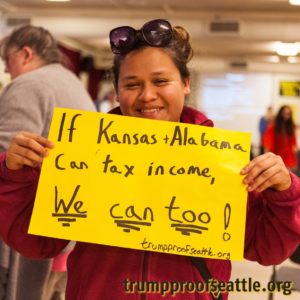 Two years ago, the Seattle City Council unanimously passed a tax on high-income households championed by the Trump-Proof Seattle Coalition, which TRU co-convened with the Economic Opportunity Institute. We knew this tax would be challenged, and that was the point: We wanted to give the Washington State Supreme Court a chance to overturn flawed 1930s rulings that have stymied efforts to fix our state’s upside-down, regressive tax system for generations. Venture capitalists and other members of Seattle’s wealthy class immediately sued the city, and since then the tax has been winding its way through the court system.

On Monday, the Court of Appeals handed down its ruling. While as expected it didn’t uphold the tax— only the higher court can overturn its own previous decisions— the ruling was extremely favorable for us. It affirmed Seattle’s authority to tax income, and opened the door for the State Supreme Court to address precisely the question we want them to address: Whether income is a form of property (we say not!) and thus, according to our state’s constitution, only taxable “uniformly,” not in a graduated or progressive way.

If the State Supreme Court upholds Seattle’s tax, our City will have a robust, progressive, revenue source, revolutionizing our ability to provide essential public services and guarantee a dignified standard of living for every Seattle resident. Even if the higher court strikes down Seattle’s specific tax, its ruling could still open huge new possibilities for state and local tax reform. This decision from the Court of Appeals is extremely encouraging, and while we are trying not to get our hopes up too much, we are thrilled and our opponents are “dumbstruck”!

Next stop: On to the State Supreme Court!