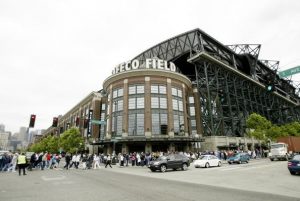 Today the Seattle Mariners announced the “Home Base Partnership” to create a several million dollar revolving fund for eviction assistance and prevention, a move housing advocates say is a response to public pressure and a victory for community organizing.

The billion-dollar corporation’s newfound interest in the housing crisis emerges in the wake of a pitched battle with affordable housing advocates over the disposition of the county’s lodging tax revenue earlier this year.

In May, County Executive Dow Constantine proposed that $185 million in lodging tax funds be spent on maintenance and upkeep of Safeco Field, the Mariners’ stadium. The proposal sparked an outcry from King County residents and advocates who argued that this public money should instead be used to address the region’s deepening housing and homelessness crisis. Over 80 organizations signed a letter to County Councilmembers urging them to prioritize basic human needs over stadium improvements that amount to subsidizing a profitable private corporation.

In September, after several overflowing public hearings, the King County Council voted 5-4 to allocate $135 million to Safeco Field. In a partial victory for the housing movement, the compromise bill also directed $165 million more to affordable workforce housing and services for homeless youth than the Executive’s original proposal.

In the course of this multi-month public debate the reputation of the Seattle Mariners and its billionaire and millionaire owners took a beating. Allegations of sexual harassment by Mariners executives and an internal culture of misogyny surfaced. Both current and former stadium authority directors stepped forward to say that the team’s new lease lacked transparency and was a terrible deal for the public. The corporation’s wish list of “necessary improvements” to be funded by taxpayers was revealed to include such items as a $501 toaster.

“Basically we shined a light on a really shady deal,” said Katie Wilson, general secretary of the Transit Riders Union. “I’m glad the wealthy owners of the Mariners are trying to buy back the public’s goodwill by funding eviction prevention, because this money will help a lot of people. Of course,” she added, “that doesn’t change the fact that subsidizing stadiums is a really poor use of public funds.”

“Without the quick mobilization of a broad coalition of grassroots housing advocates, tens of millions of dollars in taxpayer subsidies for a private business would have sailed through with hardly any public discussion,” said Ethan Phelps-Goodman, founder of Seattle Tech 4 Housing. “It shows the power of regular people speaking up that we were able to win an additional $165M public investment in affordable housing. And now the Mariners’ fund for eviction prevention shows that corporations too will listen and act if the public pressure is strong enough.”

“Eviction assistance and prevention is a good thing and at the same time the McKinsey Report showed our community must invest $400 million each year for the next ten years to build the affordable housing we already need today,” noted Patricia Hayden, Co-Chair of the Seattle Human Services Coalition. “Leadership from the Mariners would be welcome in the effort to identify and implement that investment.”

“As someone who grew up with the children of Mariners players, I’ve always had a special sort of connection to the team. Heck, Dave Valle was my elementary school principal for a year!” said Matthew Lang, Lead Organizer for the Transit Riders Union. “Even through the longest playoff drought in professional sports, it took seeing how the Mariners and John Stanton handled the lodging tax ordeal to turn me away from this franchise as a fan. A few million dollars for eviction prevention is a welcome gesture, but it would be even more meaningful to donate the $50-$100 million naming rights windfall, money that should belong to the public anyway.”

“It’s a fine thing to help tenants behind in the rent stay in their housing,” said Sean Smith, a leader and resident of Nickelsville’s Tiny House Village at Othello. “Homeless people still want more from the Mariners than lip service when it comes to preserving and supporting affordable housing for the thousands who need it tonight.”

“Supporting service providers with donations is a critically important way to support low-income families, said Joelle Craft, a renter and Washington CAN member from Seattle. “But, just as important, in standing up for renting families like mine, is to support policies that prioritize protections for low-income tenants. The mariners fought against a policy that would have directed millions into homelessness services, and our families don’t forget their work against pro-tenant policies.”

“This move by the Mariners shows that they are feeling the pressure as people have come to realize that this private billion-dollar business has swindled the public in the stadium deal,” said Hilary Keyes, a volunteer organizer with the Transit Riders Union. “I think the lesson people can draw from this experience is that organizing and advocacy creates progress, even when we don’t win everything, and even a monolithic business like the Seattle Mariners can be shaken by the power of the people.”