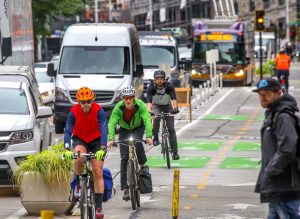 Photo from the Seattle Times article (click for link)

TRU has joined with transportation and climate allies to form a new coalition called Move All Seattle Sustainably (MASS). Last week we sent a letter to Mayor Durkan and the City Council, asking that they work with us and act boldly to transform Seattle’s transportation system. Check out the news coverage of our launch in the Seattle Times, Seattle Weekly, and Curbed Seattle, and Capitol Hill Seattle Blog.

We’ve come together with a sense of urgency. We see the climate crisis and the recent IPCC report telling us that catastrophe awaits if we don’t act now to cut carbon emissions. We see the viaduct closure looming early next year, and we know that traffic, especially downtown but throughout the city, is about to get even worse as we enter the “Period of Maximum Constraint”. Seattle must act fast to prioritize the modes that move the most people in the least space, and with the lowest carbon impact. That means public transit, biking, and walking — making it easy, safe, and fast for people to get around the city without driving. Stay tuned for our next steps, because we’re going to need your help.