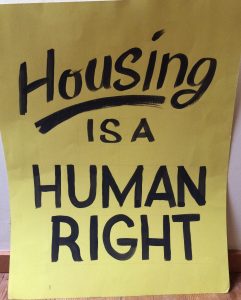 This fall, the Housing For All Coalition set out to secure a commitment from our elected officials to massively step up the production of new housing affordable to people and families with the lowest incomes. We are on the road to victory.

On Monday, November 20, shortly after approving the 2018 budget, the City Council unanimously passed a Resolution 31782, establishing their intent to tax large businesses to fund housing and homeless services by the end of March 2018.

While the tax didn’t pass this fall, as we’d hoped, we now have an opportunity to push for additional progressive revenue and a much larger package than the $25M originally proposed. New sustainable revenue at this scale is the kind of game-changer that has been so lacking in the two years since Seattle declared a Homelessness State of Emergency. Without the work of the Housing For All Coalition, the City Council would not have the courage to stand up to relentless opposition from business groups like the Chamber of Commerce and commit to raising real revenue to address the crisis.

Thank you so much to everyone who has contributed to this effort so far. TRU and the Housing For All Coalition will be there every step of the way as this legislation is crafted over the next several months. Let’s bring it home in the new year!

Steps Toward Stopping the Sweeps

This fall we also set out to reform the City’s policies on removal of unauthorized encampments, a.k.a. sweeps. We called for outreach and services to be provided without threat of removal, unless an encampment site is irremediably unsafe or in conflict with other public uses of the site. Without housing to offer, the City is merely shuffling people around and doing more harm than good.

Although we weren’t able to achieve this policy shift during the budget process, the City’s 2018 budget includes measures that will add new transparency and accountability to removals of unauthorized encampments. Henceforth the City Council will receive weekly reports of all sweeps planned for the following week, with reasons for their prioritization. The City’s ability to put up fences, such as those erected beneath the Spokane St. Viaduct earlier this month, will be restricted. And next year, responsibility for encampment removals will be shifted from the Finance and Administrative Services to the Human Services Department.

While these measures fall short of “stopping the sweeps”, new layers of oversight are likely to significantly improve the situation on the ground for our homeless brothers and sisters. With continued monitoring by the Office of Civil Rights, the Housing for All Coalition, and other allies, we are setting the stage for further-reaching reform next year.

A number of additional goals of the Housing For All Coalition were achieved this fall: