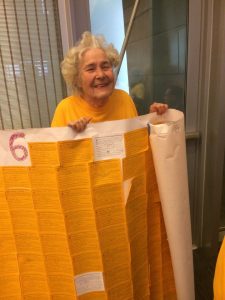 On Wednesday, May 31, we unfurled banners bearing thousands of petition cards around the whole perimeter of the council chambers, while an “overwhelming number of people” spoke in favor of a progressive income tax on Seattle’s wealthiest households to fund urgent needs.

This week we are putting the finishing touches on the legislation, and next Wednesday, June 14th, there will be a special council meeting and public hearing where the councilmembers discuss the ordinance for the first time and the people have a chance to testify having seen it.

So far we’re making all the right enemies: the Washington Policy Center, Freedom Foundation, Republican legislators in Olympia, Rob McKenna, the Seattle Times editorial board… but we don’t know who else might come out of the woodwork next Wednesday. It’s up to us to show our councilmembers that we have their backs as they consider this groundbreaking legislation: